Tomorrow night is Eat Local Tuesday at Brix with EcoRanch produce. 10% of sales will go to Flagstaff Foodlink‘s Grower Grant Program, which funds Flagstaff area growers to expand or enhance their operations. In 2017, we received a Grower Grant from Foodlink to help us install a water efficient irrigation system.  That system has helped us grow over 2,000 lbs of food, provide food for our 15 share student led CSA (5 shares donated to WIC), sell kale to Tepa Burger, and donate to the Flagstaff Family Food Center, not to mention supplement our diets and give food to our interns and volunteers.

Today we are a stop on the Coconino County Sustainable Homes Tour.  Come on by and visit us!

Can you believe that we only have six more distributions left!  Time sure has flown and mid October will be here before you know it.  We’ve been hovering in the low fifties to high forties at night so we’ll be starting to close up hoops soon enough.  This season has been fantastic as far as production and aesthetics goes.  I’d say the EcoRanch has never looked better!  Together with Tree A’Lolly farms, we have grown 1,000 lbs of produce for our share members and 340 lbs of that produce has been given to the Women Infants and Children (WIC) program.  Squashes, pumpkins, potatoes, and corn are on their way! 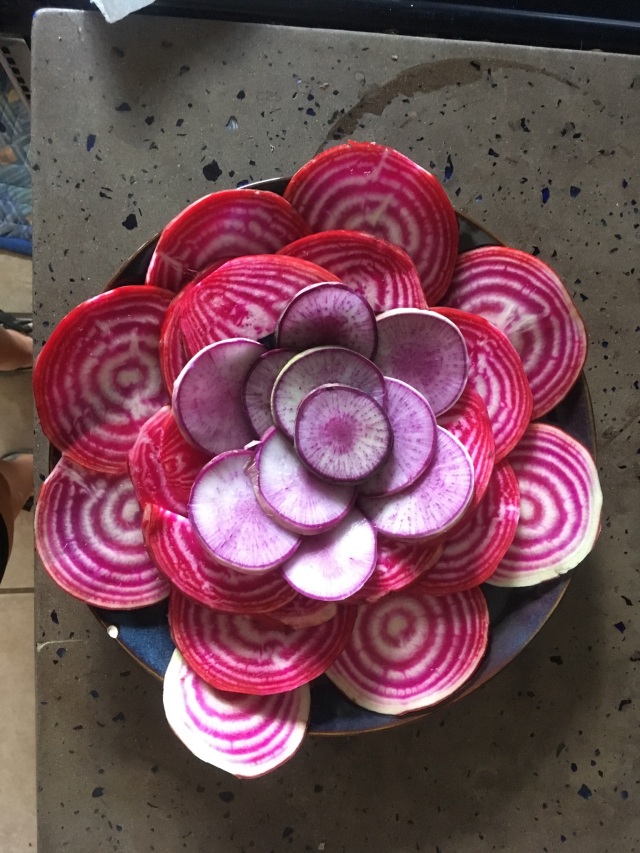 We choose to offset our energy from APS through their Green Choice program.  Here’s a breakdown of the renewables from 2016.

We’re now registered as a pollinator site, you can too! Good luck to all you pollinators out there – stop by our place anytime you like! 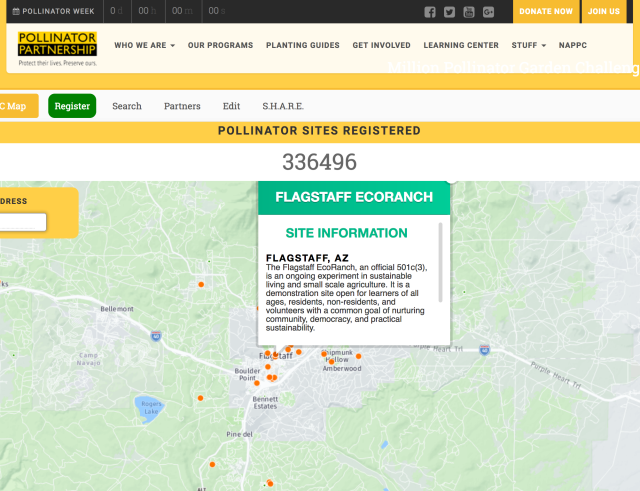 Head on down to Root for the Flag EcoRanch Kale Salad…we’re now on their menu!  Thanks Dave-O and the Root family.

Our CSA has been going great too!  We ended up selling ten shares which allows us to donate five to the WIC program here in Flagstaff.  To date, we have donated 180 pounds to WIC families.  We have met our target weight for weekly shares, about four pounds, with the exception of this past week, which was just shy of nine pounds!  Thanks rain, keep on coming! 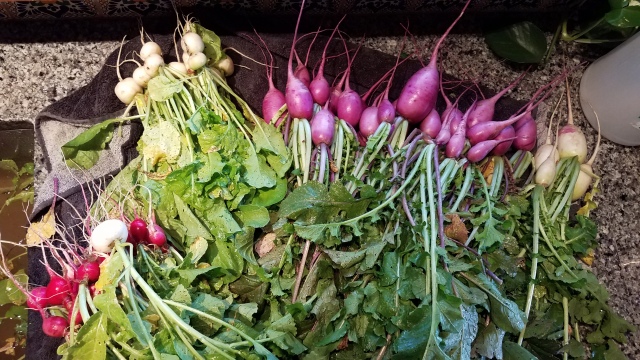 Our student driven CSA starts soon!  This is a collaborative CSA between Flagstaff EcoRanch, Tree A’Lolly Farms, and WIC.  Here are a few photos of some of the veggies growing and awaiting your dinner plates!  We are selling ten shares and donating five to WIC.  Please send us an email if you are interested.  We do have a waiting list, but as the season progresses we are hoping to determine whether we can offer more shares at a reduced cost.  If so, we can get in touch if you are interested.  Shares run $250 for a twenty week period. This will be slightly experimental for us as we have never run a CSA before so we will be checking in with our members for feedback.  Shares will have about three to four pounds of produce each week and towards the beginning of the season, may be supplemented with eggs, dried herbs, or teas as we wait for everything to grow.  One of the biggest challenges in Flagstaff is working with the weather (like 2 inches of snow last week) and making sure everything doesn’t freeze.  Interns and capstone students will be getting involved and using this CSA as a learning tool.  They will be collecting harvest data, consumer feedback, learning about marketing and sales, working with finances, and strengthening community partnerships. We hope that through this CSA we can continue to “grow food to grow the local food network.” 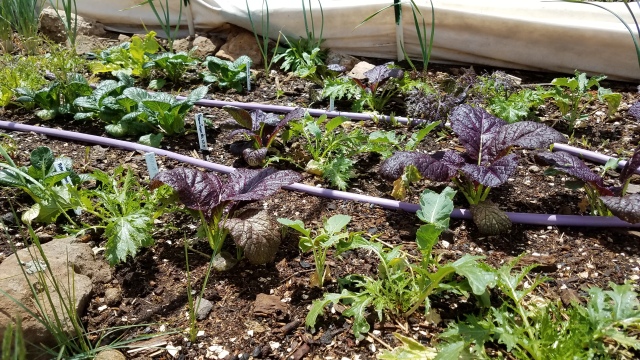 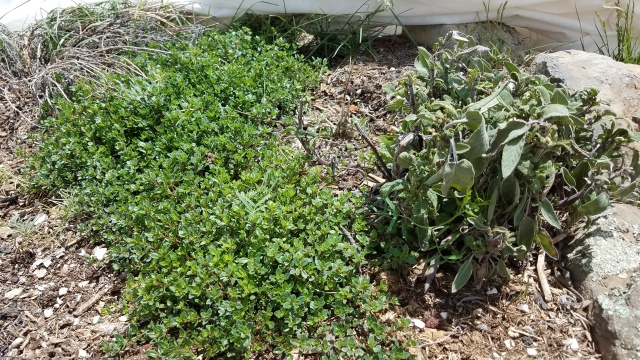 We wanted to give a huge thanks to Chris and Phil from Warner’s who donated time and materials to our drip line system and upgrades.  This project had a lot of moving parts and a lot of help from the community.  Chris, our grant writing intern, helped us secure the Grower Grant through Flagstaff Foodlink for materials for our drip line irrigation system; thanks Foodlink! Chaz, another intern, researched and designed the irrigation system and then collaborated with Chris Whitney from Warner’s to fine tune his designs.  We had eight volunteers who came out to learn about drip lines and helped us install the system. Currently we are fine tuning the lines and the system. Normally, purple line is used for non-potable water, but we are using it here with water from our rain barrel and underground well.

This gives us a huge advantage in understanding our irrigation needs and water use.  The line installed is from Rainbird and has pressurized emitters every twelve inches that release 0.9 gallons of water per minute.  We can calculate the number of emitters and figure out how much water will saturate the soil and then double check our water meter to see that the lines are emitting the same amount.  If we see discrepancies, we can check for damaged lines/emitters or leaks in the system.  We can also cross-reference the amount of water and soil moisture with the variety of plant, temperatures, and the amount of wind to fine tune the length of time we irrigate so don’t over or under irrigate the beds, one of the problems we had last year which damaged a good amount of our kale.

Thanks again for everyone’s help in this project.

Chaz (intern) in green, working with Chris (Warner’s) on calculations and other volunteers setting up lines.

A new CSA in town

This semester, I have had the pleasure of working with six capstone students (Cory, JJ, Gabe, Sean, Kolby, and Austin) at NAU from January through May.  This group has been one of the hardest working and most professional groups of capstone students I have worked with.  I am excited to announce their project, that the Flagstaff EcoRanch and Tree-a-Lolly Farm in Doney Park run by Peggy Pollak, will be partnering to offer a low cost CSA that will support Coconino County WIC (Women, Infants, and Children).

This is a 100% student designed and developed CSA.  The students were first tasked with conducting a feasibility study on 20 CSAs in Arizona, Colorado, and New Mexico focusing on high elevation farms.  They analyzed what products were included in shares, marketing strategies the farms used, and the cost and length of time for each share.  Next, the students analyzed our harvest data from 2013 to 2016, compared it to their research, and then applied what they learned to their own CSA program.  Finally, the students developed a website, outreach materials, and blog posts for their CSA.

We are starting small, selling ten shares this year, and for every share we sell, we will be donating a 1/2 share to WIC.  We hope this collaboration will get healthy, locally grown produce to families in need but also raise awareness about WIC’s voucher program.  This program gives WIC members vouchers to use at the Flagstaff Farmer’s Market which starts this month in the parking lot of City Hall.

We are offering shares for $250 for a 20 week period, June through mid October.  Student interns will be managing the plant health, recording harvest data, delivering produce, and collecting feedback from our share members.  Although not as abundant as the one from the “Flagstaff CSA and Local Market,” which most people are familiar with, the produce in our CSA will be 100% local to Flagstaff and grown and managed by local students, teachers, and community members.  We already have a waiting list and if everything goes well (planting, weather, crop health, etc.) we plan to offer 10 week shares starting in August as the harvests become more abundant.

Part of the students’ project was to write an educational blog post so I included it below.  If you have any questions about our CSA please send us an email and we hope to grow you food in the future.

Relative to human history, the idea of NOT eating locally produced food is a new phenomenon. Prior to industrial agriculture, food consumed within a community was inevitably produced in close proximity. It has only been within the last six decades or so that modern transportation and refrigeration has allowed produce to cross both nation-wide and international borders. There now exists a food culture in the US where “local” food items are the exception, and not the rule. However, in recent years the inevitable negative health and environmental consequences of industrial agriculture began to manifest, causing an emergence and rise in the demand for locally sourced food.

Community Supported Agriculture is an agreement between local farms and supporting members of the community to consolidate the production and consumption of locally produced food. In return for a financial contributory stake prior to the growing season, members receive a weekly share of freshly harvested, local produce and specialty items. By supporting local farmers, members assume the risk and bounty of local food production alongside the farmers themselves. This connection between a supporting community and the farmers they endorse helps to bridge the ever-growing gap between food production and consumption. Moreover, this bridge continually fosters a symbiotic relationship between the land, the farmers, and the supporting members of a given community.
Rekindling the connection between local farmers and the community they support is the first step toward an agricultural system that promotes sustainability and empowers education. A functional CSA serves as a catalyst to revamp the diminished connection between the production and consumption of food.

The Flagstaff EcoRanch and Tree-A-Lolly Farm CSA collaboration will operate from June through mid-October with shares costing $250 each. For every share sold, a half share will be donated to W.I.C (Women, Infants, and Children), a charity organization that gives nutritional aid to vulnerable nursing women, infants, and children under 5 years. Weekly shares will include 3-4 lbs of organically grown produce harvested from the Flagstaff EcoRanch and Tree-A-Lolly Farm. Occasionally, specialty items such as eggs, herbs, and dried/canned items will supplement weekly shares. Shares will also include a list of recommended recipes or preparations that will help members better utilize items in the weekly share. Furthermore, educational information will be disseminated weekly such as storage techniques, ways to utilize all parts of a given item, health and environmental benefits of locally sourced food options, and suggestions for a more sustainable lifestyle.

Check out our shout out to student worker page…is shout out still a thing?  Anyways, we just made a page to highlight all the awesome people and work that is being completed here at the EcoRanch by our student interns and capstone groups.  Click Below!

On another note, we’re excited to say we have become a Certified Wildlife Habitat through the National Wildlife Federation.  We also just had some students install three bat boxes for their capstone project in order to monitor bats (Little Brown, Big Brown, and Pallid) around the Flagstaff area.

Our hoop houses and soil are finally ready and today will be dedicated to planting starts, seeds, potatoes, and flowers. Here’s to another great season!