A big thanks to the wonderful Honeybee Teacher, Patrick Pynes, for coming out and working with our hive.

To give you some background, we were overwintering our hive in Cornville last year.    Usually we would move the hive to Flagstaff for the monsoon season and to help pollinate our garden in the summer.  However, life got the best of us and we never moved them.

Well in that time, the bees’ population grew to the point that they swarmed and requeened themselves.  The new queen mated with Africanized drones in the area which made for a pretty defensive hive so we move them up here in the fall to see is they would “calm down” or even survive the winter.

They did survive and became even more aggressive.  We tried finding the queen so we could remove her and introduce a more gentle queen, but she remained allusive.  It seemed like we might need to eliminate the hive, but to our surprise, she and half the colony swarmed again due to overcrowding.  This worked to our benefit because the new queen that the remaining colony raised, mated with local drones who are much more docile, reducing the colony’s temperament.  We went into the hive on Friday and the changes were drastic.  The new queen had calmed the entire hive, is producing brood, and an abundance of honey that we could even take some for ourselves. 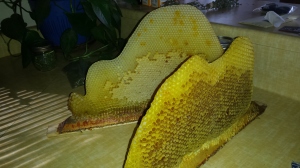 If you need help with your hives or getting one started, call on the Honeybee Teacher.

This entry was posted in Uncategorized. Bookmark the permalink.